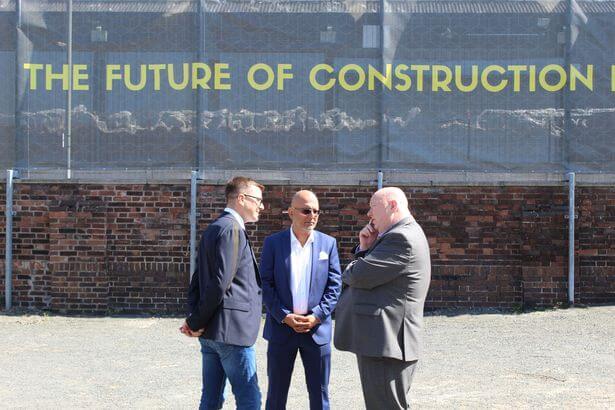 Space Modular says its futuristic homes are not only comparable to traditional bricks and mortar houses – but superior to them, as City Region Business Correspondent Mark Thomas reports.

A Liverpool company has unveiled a new concept in modular housing which it believes can make a major contribution to tackling the UK housing crisis.

Space Modular revealed its first showhome on the backlot of its offices in Old Swan this month, in a series of presentations to housing association and local authority experts and VIPs including City Mayor Joe Anderson and Metro Mayor Steve Rotheram.

Modular housing has become a buzz word in the construction industry as the nation faces the challenge of attempting to build three million new homes in the next 20 years – with social housing a major priority.

Space, which launched itself on the property world at MIPIM in March, claims as its unique selling point its relationship with Malaysian Liverpool FC fan Jespal Deol, who has many years experience manufacturing modular homes at his factory in the Far East, where the technology is commonplace.

Jespal has signed up as a director of Space, and builds the homes to order for the company at his factory in Thailand before shipping them to the UK ready-built.

“At Space Modular we don’t see ourselves as a building company. We are a technology company disrupting the construction industry by changing the way space comes to life,” Ian told BusinessLive.

“There is nothing modern about our product though –  it has been tried and tested for twenty years. The issues that people setting up modular housing factories in the UK are having, we had 20 years ago.

“We are taking phone calls from other modular housing factories asking for assistance on logistics and handling the units, which we are helping them out with. As much as there is competition out there we are all there to do the same thing, deliver houses.”

Space has partnered with Peel Ports to take delivery of the massive, 20 tonne steel and concrete modular units at its deep water Liverpool Two port.

The units are then transported by road to pre-prepared building sites, where they can be dropped into place and connected to utilities in a matter of hours.

Ian, along with his childhood friend and lifelong business partner Christopher Smith, who is commercial director of Space Modular, decided to explore modular housing after getting involved with traditional building projects through Space’s sister business Shape Consulting Engineers.

“We had a site that was only five two-bedroomed terraced houses on a 12 month build. It ended up taking us two years.

“Every delay you could imagine we had. We had a wall blow down in a storm, the price of bricks went through the roof, and we had issues with labour and with connections. We had such a nightmare with this site.

“We are used to putting processes in place to make things easier, and that’s when we started looking to modular and did our research and development on modular in 2017.”

They got planning permission for their modular show house on February 19 this year, ordered it on March 15, and it left the factory in Thailand on April 17.

After a 26-day voyage it arrived at Peel Ports on May 13, ready to be transported to Old Swan and lowered into position by crane.

“So from February we have managed to build a two-bedroomed house. And we could actually have done it a lot quicker, and had it ready it six weeks earlier,” said Ian.

Modular housing in the UK tends to suffer from the stigma of the ‘prefab’ – the mass produced prefabricated houses built in their thousands to address the housing crisis after World War 2. A few still survive today, decades after their intended life span.

Today’s modular homes are light years ahead of those cheaply built, draughty little boxes, and Space claim that their new houses are not just comparable with traditionally built houses, but superior to them.

The two-bedroomed show house itself is an impressive sight, with cool, contemporary lines and a feeling of real solidity and quality about it.

Said Ian: “Our product is steel and concrete, Our stairs are engineered steel.  When you walk upstairs in a traditional house you hear creaking. That doesn’t happen in these houses.

“Our kitchen worktops are all quartz stone, and will stay in this condition for 100 years. There are no boilers and there is no gas supply to the units. Everything is electric and solar, and they are highly energy efficient and super-insulated.”

Space Modular’s first goal is to import 500 modules via Liverpool for the North West, with ambitions to rapidly increase to 5000 modules for wider UK distribution.

“We are working with people to design home templates for their organisations,” said Ian.  “They might have 20 different designs with two, three, four and five bedrooms, upstairs living, downstairs living, wet room bathrooms, however you want the house, we can design it.

“We can go from low rise to medium rise and high rise. We can scale up or down.

“A traditional construction site today is exactly as it was 50 years ago, except perhaps that the JCBs are a little bit bigger. Developers are unable to build houses fast enough to meet the demand.

“This is a production line process. We deliver on time, on budget and on schedule, with no changes in price.

“Our vision is really simple; we want to build better homes, build them faster and build them cheaper.”